For my boyfriend’s (K) birthday last year, I brought him 2 tickets to go to the Anfield Stadium tour and museum in Liverpool.

After quite a few months we finally settled on a date when we were both free to go 😊.

I’ve never been a massive fan of football, I mean… I have watched it every now and then with my dad. And when me and K met and became a couple I slowly watched it more often, as he is crazy about football too.

Going on a football tour isn’t typically my kind of “thing“… But we all know that sometimes you’ve got to give and take to bring a smile on everyone’s face! I won’t lie I didn’t “dislike” the tour, I really enjoyed the experience actually, it was an opportunity to get my camera out and capture some memories!

When we arrived we had to go through the security check, hand in our tickets and get a head set so we could listen to a bunch of information while on the tour.

For the first part of the tour we had to head up to the top floor and watch a little video, that told us the story of Anfield Stadium and how it became what it is today. Watching the video actually got me quite emosh and touched… don’t ask why, I don’t know the answer myself 😂.

Once the video finished, we all set off around the stadium. We passed many walls full of encouragement and history. All around the building there was lyrics from Liverpool football songs, quotes and moments from other famous Liverpool things as well.

When we reached the top seats of the stand it was quite breath taking, looking around and imagining what it would be like if the seats where all full, and the players on the pitch.

There was a lot of fancy and expensive parts to the tour… the home changing room, bars for rich and famous people to drink and enjoy the game… Even the stair case that leads the players to their changing room was a tad posh.

We got to walk down the isle that the players run through to get to the pitch. K got to touch the sign that they all touch as they go through the door. He also sat on the chair that someone important gets the sit on too!

K was VERY happy with his birthday present 😆. To be honest ‘happy’ is probably an understatement, defo won some girlfriend points here, hehe.

Overall I’d say that we both enjoyed our day out in Liverpool, we finished it with a lovely meal and headed home. 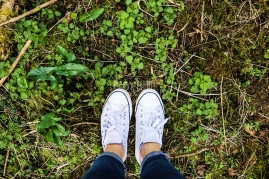